The Origins between History and Legend 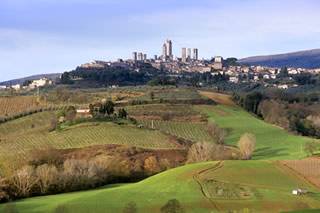 The foundation of San Gimignano dates back to ancient times. According to legend, in 63 B.C. two brothers, Muzio and Silvio, two young patricians escaping from Rome after their implication in the conspiracy of Catiline, sheltered in Valdelsa and built two castles: the Castle of Mucchio and the Castle of Silvia, which would develop in the future San Gimignano.
The first historical document mentioning the name of the town is dated 30th August 929, when Ugo di Provenza donated to the Bishop of Volterra the so-called Mount of the Tower "prope Sancto Geminiano adiacente" (next to San Gimignano). The name of San Gimignano probably comes from the bishop of Modena. According to legend, during the barbaric invasions the saint appeared miraculously on the city walls, and saved the town from Totila's threat. 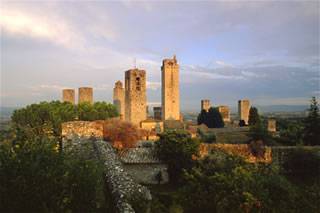 The fascinating legends on the town are not more interesting than the long and complex history of San Gimignano.
The area of San Gimignano had his first inhabitants in prehistory, but the first relevant settlements date back to the archaic Etruscan period. At that time the area of Pugiano e.g. was already known as an important sacred site in the unspoilt valley of the torrent Riguardi.
Traces of settlements are more and more numerous during the Hellenistic period, when the hill of San Gimignano was probably inhabited, as some tombs discovered inside the historical centre would demonstrate. If during the Etruscan period inhabited areas were mainly limited to the top of the hills, with the Roman colonization the valley bottom was preferred, especially the areas next to streams, whose waters were often used as communication routes. To be noted as an example the Roman villa of Chiusi, in the vicinity of the torrent Fosci.

Between High and Late Middle Ages 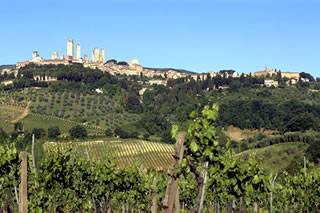 The constellation of small-sized rural villages of the Etruscan and Roman period that developed in the more important area of Volterra, by the end of High Middle Ages (tenth century) developed into the most ancient core of the current historical centre. In 998 San Gimignano was still a village along the Via Francigena. From a political point of view it belonged to the bishop of Volterra, who resided in a castle at Poggio della Torre.
San Gimignano mainly developed in the first three centuries of the Millennium, thanks to its favourable geographical position. In High Middle Ages the Via Francigena, first traced by the Lombards, became the route of pilgrims who travelled to Rome, mainly from France. The detour to the port of Pisa grafted in San Gimignano, and the town, settled around the hillside variation of the Via Francigena, became one of the most important transit and stopping sites for all travellers.

From Free Commune to the submission to Florence 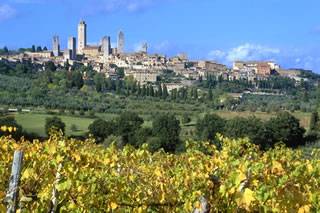 In 1199 the town, that had increased considerably, declared itself a Free Commune. At first the government was in the hands of Consuls, then of a Podestà, who was periodically changed. For impartiality reasons the governor was always a "foreigner" and he remained in charge for six months.
Despite the bitter political dispute between the Guelfs, who supported the Pope, and the Ghibellines, sided with the emperor, the Commune developed and prospered in agricultural activities in particular thanks to the production of saffron, Greek wine, and Vernaccia, to the commerce of wool, and to money lending to wear. Around the first half of the fourteenth century the town consisted of 13.000 inhabitants and the historical centre was enclosed in the second circle of the city walls. The plague of 1348 decimated two thirds of the population and, since then, San Gimignano knew a long period of decline in the shadow of the dominant Florence.

The economic, architectonic, and cultural boost of San Gimignano stopped around the first half of the fourteenth century, when the Commune submitted to Florence.
After 1348 San Gimignano would never attain again the economical and demographical previous levels. Drastic depopulation and economical decline, together with the loss of political autonomy, produced a clear breakdown: towers fell down, or they were cut off, the palaces got damaged, and due to the general decay no trendy events took place in San Gimignano for centuries. This is why the historical centre of the town remained unchanged and escaped the influences of the different styles that would follow till the end of the nineteenth century, when the "gothic renovation" took place. From the fifteenth century onward there were few urban additions: the Rocca di Montestaffoli, a fortress built by the Florentines with defensive purposes against Siena, a few buildings, some small churches, unimportant maintenance works.
Despite the decay, during the Quattrocento San Gimignano knew the prestigious intervention of important artists of the time such as Domenico Ghirlandaio, Benozzo Gozzoli, and Benedetto da Maiano, who renovated and enriched the cultural heritage of the previous centuries which already consisted of precious works of art by Coppo di Marcovaldo, Memmo di Filippuccio, Simone Martini, Lippo Memmi, Bartolo di Fredi, Taddeo di Bartolo, and Jacopo della Quercia. Later on, the seventeenth century would be the all-time low in the history of the town. After the plague of 1631, San Gimignano became one of the poorest centres in the Grand Dukedom of Tuscany, with a population reduced to 3.000 inhabitants.
The reforms of the eighteenth century brought some advantage to San Gimignano as well. Agriculture, with the typical Tuscan mixed cultivation system, started to increase again and population raised up to 10.000 inhabitants, as registered in 1948. The historical centre knew an incredible revival: first with the rediscovering of Middle Ages around the first half of the nineteenth century, when several buildings were repaired and renovated, then, one hundred years later, with the exponential growth of cultural tourism, which still brings million of visitors a year to the town of the towers.
Today the Commune of San Gimignano numbers 8.000 inhabitants and lives on agriculture, thanks to a prestigious production of D.O.C.G. Vernaccia wine, and a flourishing activity of agritourism, besides small local factories in the framework of the Valdelsa industrial area. Every year the historical centre, registered in UNESCO's World Cultural Heritage, attract millions of tourists from all over the world, who comes to admire the intact medieval atmosphere preserved by centuries and decay and protected today by national law and strict local rules.

The Tower as a Symbol of Power

San Gimignano rises on top of a hill 334m above sea level, clearly visible in the distance with its many towers. Today 13 towers remain of the 72 towers of the fourteenth century, when every well off family built a tower to show its economical power (many of them are still visible in the buildings, even if they were cut off).
The first towers rose wide apart in a rarefied urban fabric looking very different from the nowadays compact centre. Towers were used in a different way. Rooms were very narrow, generally 1x2m; there were a few openings, and the walls, about 2m thick, assured cool temperature in summer and hot in winter. Almost all the towers were built next to other buildings in perishable materials such as wood and earth. In medieval times the tower was the higher symbol of power, mainly because the building process was not simple or cheap at all. Materials needed to be dug and transferred to town, and the building site arranged. Only the richest families of merchants and moneylenders could afford the works of construction.
The house occupied just part of the tower. The ground floor consisted of workshops, the first floor of bedrooms, and the higher level of the kitchen. The destination of each room followed the simplest security rules. The kitchen, where a fire was usually lighted, was located on the highest live-in room, to escape in case of accidental fire.

During the twelfth century the changes in the buildings were mainly directed to improve the daily life. The need of larger inside spaces and of wider openings brought to new building models, which mainly involved the towers.
The reference model for the towers built between the first half of the twelfth century and the first half of the thirteenth century is the so-called Pisa model, exported from the famous Tuscan maritime town. According to this style, buildings had one or more high and narrow openings on lower levels, which cross the tower from side to side. The openings that stretched for several levels were shared inside by wooden floors, which corresponded to outside full-wide wooden balconies. With these balconies inner spaces were expanded outside the walls of the buildings.

From towers to palaces

From the end of the twelfth century, the towers built according the same model were sided by other buildings of lower height that may be already defined palazzi. From the second half of the twelfth century, bricks appeared, and they were used in total or in part to erect buildings.
Since the first half of the thirteenth century towers were not built anymore, whilst palaces were built according to the most up-to-date and fashionable trends of that time. Since the first half of Duecento, the major Tuscan art towns such as Florence, Pisa, Lucca, and Siena developed some peculiar architectonical features, different for each town. This is not the case for San Gimignano, where architecture developed according to eclectic features, merging different styles and influences from different towns the Commune had come in touch with. The outcome is a very original and peculiar architecture.