This gate was build during the 13th.Century and its peculiarity is the external segmental Arch that is surmounted by a guardroom that is supported by six trilobated hanging arches.

Next to the guardroom, on the left of the observer, there is a small bell tower that surmount the right nave of a 16.th century church, "La Madonna dei Lumi", that nowadays is almost completely destroyed.

Walk tour along the city walls 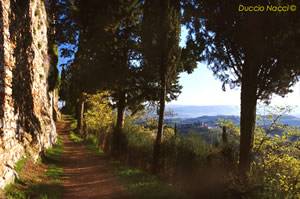 It is possible to walk along the perimeter (2.176m) of the second circle of the city walls (thirteenth century) that delimit the historical centre of San Gimignano. This walking tour, that can be joined from different access points, inside or outside the town, affords lovely views of the scenic surrounding hills and of the Elsa valley beyond. The path is marked by several Medicean donjons (fifteenth-sixteenth century), the main access gates to the town: Porta San Giovanni (south end), Porta Quercecchio (west end), Porta San Matteo (north end), Porta San Jacopo and Porta delle Fonti (east end).
Porta delle Fonti takes its name from the public fountains that are located downhill a short distance from the gate.
According to legend in the first half of the sixth century, when the town was under threat of the Barbarian Hordes led by Totila, the local people prayed St Geminiano (fifth century), bishop of Modena, and he miraculously appeared after his death on the Porta delle Fonti preserving the town from the Goths' scourge. 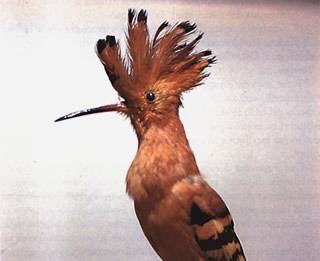 An ornithological collection of great historical and naturalistic interest which dates back to the second half of 19C AD.
Located in the small 16C church of San Francesco, in Via Quercecchio, this museum hosts the former collection of Marianna Panciatichi Ximenes d'Aragona Paolucci, a woman who was greatly interested in ornithology. Most items, collected between 1866 and 1911, come from the Monte estate (San Gimignano).
The whole collection, now featuring 371 specimens, was donated to the Town of San Gimignano in 1927. The present display was devised by both University of Siena (Environmental Biology Department) and National Institute of Game Biology in 1990. 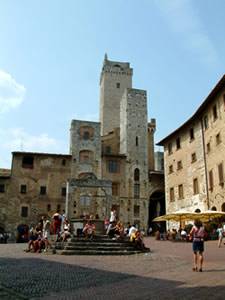 The archway Arco dei Becci e Cugnanesi leads to Piazza della Cisterna, the most beautiful square of the town, originally lined with workshops and taverns. In the middle there is an octagonal travertine well that gives the name to the square. The well was built in 1273 and enlarged in 1346 by Podestà Guccio dei Malavolti, whose coat of arms - a ladder - is engraved on the stone walls of the well.
Originally its name was Piazza delle Taverne, than Piazza dell'Olmo, because of the huge elm tree that dominated the square. Piazza della Cisterna has a timeless magical atmosphere that brings visitors back in time. Ancient buildings and towers alternate in perfect harmony all around the square, whose redbrick pavement with irregular triangular patterns leads to Via del castello.
Looking at Via del Castello, on the right-hand side, you can admire Palazzo Tortoli, with its elegant mullioned windows dating back to the fourteenth century, the cut-off tower which belonged to the Pucci family between the nineteenth and the twentieth century, Hotel Cisterna, the former residence of the Cetti and Bracceri families, then turned into a Children's Home (Ospizio dei Gettatelli); Palazzo Ridolfi, the towers and the houses that belonged to Beccis and Cugnanesis; Palazzo Pellari and Palazzo Ardinghelli, with its two towers.
On the other side of the square, Palazzo Lupi stands with its Torre del Diavolo, the Devil's Tower: its owner, back from a long journey, found it unexplainably higher and he ascribed the work to the Devil. After Vicolo dell'Oro, originally the street of goldsmiths' workshops, there is Palazzo Cortesi-Lolli, erected on pre-existent buildings. 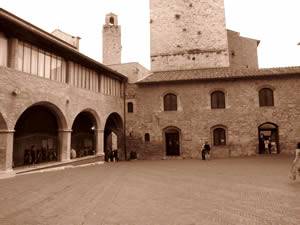 Between the Duomo and the Palazzo Comunale, on the left side of the church, there is a ramp leading to Piazza Pecori, a square named after a local personality, Luigi Pecori, a priest fond of local history who was born in 1811 and died in1864. The square is also known as Piazza della Propositura. On the right side of the square there is the Lodge of Announciation, also called the Lodge of the Baptistery, because of a hexagonal font by Giovanni di Cecco ordered in 1472 by the members of the Guild of Wool.
The font is beautifully engraved with scenes depicting the Baptism of Jesus. The wall at the bottom of the Lodge boasts a beautiful fresco of the Announciation ascribed to Domenico Ghirlandaio. On the left side of the square there is Palazzo della Propositura, built on a portion of soil that belonged to the Town Hall before the Asset Swap of 1288. The façade has beautiful mullioned windows. In front of the Propositura there is a small well covered with a brick shelter dating back to the late seventeenth century. The Museo di arte Sacra (Sacred Art Museum) is set in the lower part of square in a building that formerly housed the Chapelains' Dormitory. Untill 1600 the square appeared as a large cloister annexed to the ancient Pieve. 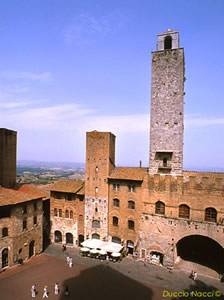 Palazzo Chigi-Useppi and the former Podestà's Palace with its Torre Rognosa - used as a prison till the end of the fourteenth century - stand in Piazza del Duomo, opposite the church.
The upper part of Palazzo Vecchio del Podesta is in brick. The stone lower part of the building consists of a large lodge with stone seats. On the wall at the bottom there is a fresco by Sodoma (1513) depicting the Virgin with Child, St Gimignano, and St Nicola, and the entrance door to the tiny lovely theatre of the town, Teatro dei Leggieri, built on the site of an ancient theatre in 1534, then refurbished in 1794.
When the Podestà moved to the new Palazzo Comunale, erected next to the Duomo in 1298, the old Palazzo was first used as a hotel for distinguished guests and then as a Male Public School. 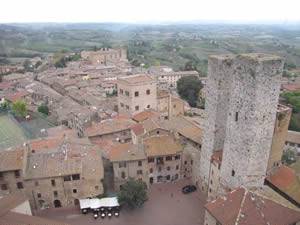 Piazza delle Erbe opens on the left side of the Duomo. The name probably comes from the local produce market which is usually held here, as in the past. It was officially named Piazza Ugo Nomi (Brogi Veronesi Pesciolini 1840-1910), a priest of a noble family.
The square has an original triangular shape wedging towards la Rocca. It has been recently paved with bricks, looking now larger, but less intimate than it was some yeas ago, when it was shaded by old pine trees and had a small fountain. Today, the most interesting architectonical features of this Piazza are the simple elegance of its houses and the two "twin" towers, erected by the Ghibelline Salvucci family. Their palace, however, does not exist anymore.
On the left side, the square is bordered by the bell tower and the side wall of the Collegiata, that still bears traces of the gothic windows closed to accomplish the frescoes of the New Testament. 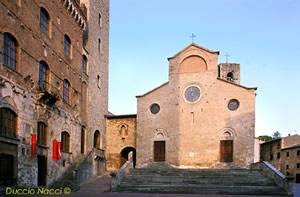 The Duomo of San Gimignano and its square
Entering Piazza del Duomo from Piazza della Cisterna, on the left you can see the Palazzo Comunale, which stands next to the staircase leading to the entrance of the Duomo (or Basilica Collegiata di Santa Maria Assunta). Opposite you can see the Palazzo that belonged to the Ghibelline Salvucci family, bitter enemies of the Guelph Ardinghellis, whose houses stood in the adjoining square with the "twin" towers. They say that these two towers, which were not identical in size, had been erected by the Salvuccis to bypass the Communal Statutes of 1255, according to which no towers in town could be higher than the Podestà's Tower (Rognosa). In order to boast their power and impudence, the Salvuccis built two towers: the base of the second one could be superimposed to the top of the first one, and the two towers, if ideally put the one upon the other, were definitely higher than the Communal Tower.
On the right there is Palazzo Chigi-Useppi and the former governor's palace, Palazzo Vecchio del Podestà, with its Torre Rognosa that was used as a prison until the end of the fourteenth century. 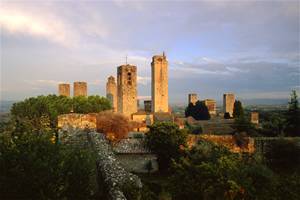 From Piazza del Duomo, crossing Pazza delle Erbe on the right side of the church, you can climb towards Rocca di Montestaffoli. Originally a castle of the Lombard Astolfo, later a Dominican Convent, this fortress was built by the Florentines in 1353 when the town submitted to Florence to protect it from possible attacks by Siena or from internal riots that may arise inside the town itself. The fortress housed soldiers led by a Florentine commander. The fortress has a pentagonal base with a perimeter of approx. 280m, turrets on each corner and passages that linked it to the city walls. It was protected by a front gate and by a drawbridge.
Today only one of the ancient turrets is still safe and open to visitors, and it offers breathtaking views of the historical centre with its unique towers and surrounding countryside.
Every year on the third weekend of June the Rocca is the theatre of a tournament called "La Giostra dei Bastoni", the pick event of "Ferie delle Messi", a local medieval festival.

Porta delle Fonti opens into the countryside and leads to the public fountains, where originally local people drew water, and washed their cloths.
The fountains, dating back to the fourteenth century, consist of ten Roman and lancet arches that conceal the first Lombard stony fountain dating back to the ninth century.
This gate was part of the second circle of walls, but it was altered during the twentieth century. In 1930 the chapel built upon the gate in 1501 was demolished, and the fresco contained in the chapel - depicting the "Virgin with child, St. Michael, and St John the Baptist" - was moved under the lodge of the Town Hall. 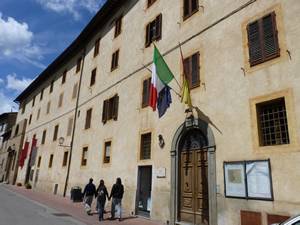 The gate "Porta San Matteo" is located on the second walls circle of the town that was build during the 12th. Century; the walls originally present seven entrances to the town.

The gate is surmounted by a double arch, ogive and depressed, and is surrounded by six small arches that were build successively. This gate overlooks the first town suburbs, the road to Certaldo and the small tower "torrione dei frati".

Before exiting Porta San Matteo, the Northern gate, turn right into narrow Via Cellolese, that leads you straight into one of the most interesting squares of the town: Piazza Sant'Agostino.
The small Church of San Pietro is located next to the large building with the Convent of the Augustinian Friars, but it is oriented in the opposite direction. It is one of the most ancient churches in San Gimignano (12th century).
In the middle of the square, between the Church of San Pietro and the Church of Sant'Agostino, next to the convent, there is a hexagonal stone well surmounting a hexagonal base with two steps.