The Pilgrim passports, the stamp, maps and gadgets of the “Via Francigena” are available at the Tourist Information Centre.
Click here and you can have a look at the gadgets by the
"Slow Emotion" collection 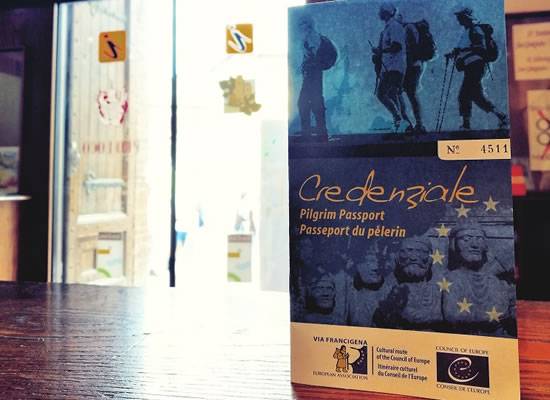 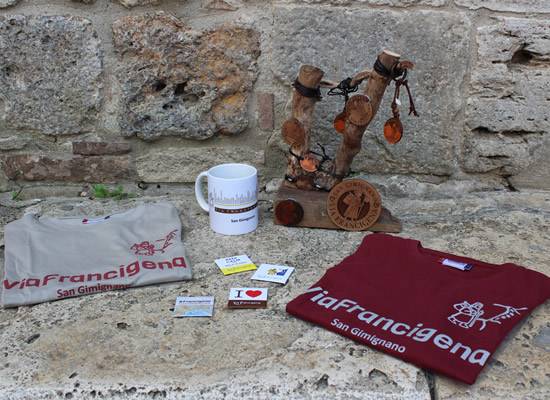 Via Francigena in San Gimignano 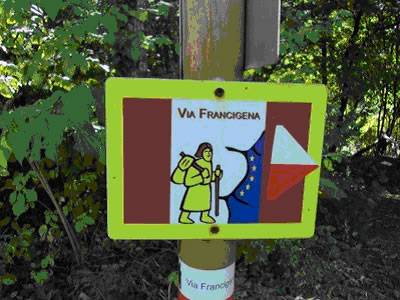 "When Bishop Sigeric walked thorough it between 990 and 994, San Gimignano (Sancte Gemiane, as he reported) was a castle of the Church of Volterra. The Via Francigena was surely the basis of the quick development that brought San Gimignano to free itself and manage its own land district - that was about the same area of the current town - in balance between Florence and Siena. The walls that the town of San Gimignano built at the beginning of the 13th Century were already solid, but the great market expansion and the following population growth let increase the built-up area so much that during the second half of that century it was necessary to build a new wall ring. The new walls included not only the hillocks of the "Torre" and "Montestaffoli" but also the populous "San Matteo" and "San Giovanni" that were developed directly along the Via Francigena. The construction of the Palazzo del Comune in 1288 (Town Hall) determined the same urban fabric that nowadays represents one of the most significant expressions of Middle Age, but it didn't help to rise to dignity of City since there wasn't the essential recognition from the episcopal seat.

However, the economy of San Gimignano couldn't withstand the international crisis. (.). San Gimignano didn't recover from the economic and demographic collapse and the stagnation of the following centuries determined its medieval traditional image, building its fortune and notoriety in our times. (...).