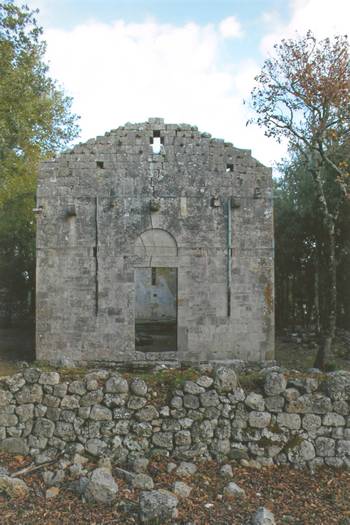 CASTELVECCHIO, formerly CASTRUM VETUS
In the most hidden part of Valdelsa, at the south limit of the municipal area of San Gimignano, it is possible to see the ruins, or to be more exact the architectural outcrops, of a very important civilian and military medieval settlement that in the past was known as Castrum Vetus, nowadays Castelvecchio: the most ancient "castle" par excellence of the Valdelsa.

Castelvecchio was probably born as "curtis" or built-up area in the 6th and 7th centuries after the Longobard invasion. Its importance and notoriety increased after 1000 AD when it was transformed in "Castrum" and in a fortified citadel with its strategic geographic position near the cross between the international Via Francigena, directed from the North to Rom, and the Via del Sale, that since the Etruscan period connected Volterra and it's saltmines to the inland towns like Chiusi, Arezzo and Cortona.

The dependence of Castelvecchio on the diocese of Volterra is attested by evidential documents, but at the end of the 12th. century both free communes of San Gimignano and Colle di Valdelsa showed their interest in possess it. With a document of May 29th 1210 Ildebrando de' Pannocchieschi, Bishop of Volterra, assigned his rights on Castelvecchio to the Commune of San Gimignano that was represented by podestà Palmiero di Angioliero.

In 1213 San Gimignano, which had expansionist ambitions, came into conflict with Volterra deploying a strong military contingent in Castelvecchio, that was located on the border between the two towns, in order to conduct the war operations. The conflict lasted about one hundred years, although alternated with periods of respite. In 1308 a pitched battle between San Gimignano and Volterra seemed to end without winners or losers, however, with an arbitration on April 14th 1309, the San Gimignano area could extend to South to the detriment of Volterra and a border fortress named Castelnuovo (now Castelsangimignano) was built on the Montespeculo.

During the 14.th century began the decline of Castelvecchio, that accentuated in the next century when, being no longer a military contingent, was not able to defend itself, from attacks by the armies first of Milan and then of Naples, which were enemies of Florence. In addition to the troubles of the war and of a critical economic situation an epidemic of plague broke out in August 1478. The people of Castelvecchio asked for a strong help from San Gimignano, which was not able to give it; despite this, they managed to overcome the difficult time until 1485 when the plague reappeared, more violent than usual.

San Gimignano provided once again no help, indeed, by order of October 1485, it declared Castelvecchio one of the epicentres of spread of the plague that had to be isolated in the public interest, without the possibility to enter or exit from the settlement.
In the 16.th century Castelvecchio was seasonally inhabited for short periods by lumberjacks, coal miners and shepherds. In 1576 the ecclesiastic authorities ensured that the church of Castelvecchio, that was already a parsonage, was in an advanced state of deterioration and the surrounding area was "selvatichissima" (extremely wild). The settlement was so completely abandoned and even forgotten that it was disparagingly called "Le Torracce" (the bad towers) because of the skeletons of two towers that emerged above the wood vegetation that has taken over.
In 1908 the writer Romualdo Pantini visiting Castelvecchio defines it in his book "...il ricordo di un paese che fu, nel tempo lontano, di cui non rimangono che miseri resti di una bellezza grandiosa e triste..." (... the memory of a country that existed in ancient times and of which there are only scanty remains of a great and gloomy beauty..."

In 1979 a group of citizens of San Gimignano decided to dig up Castelvecchio with the help of many volunteers from many parts of Italy, from Piedmont to Sicily, including many foreigners. The first "group" was formed in an association called "Historical Group of Castelvecchio" and in 1995 the settlement of Castelvecchio was recognized as "cultural heritage" by the Ministry of cultural heritage and activities (under the law June 1st 1939, n.1086 , as amended and supplemented) while the associated group was awarded as non-profit organization, with legal personality, with the Regional Decree of 30 October 1995, n.4903.

By decision of March 21st 1996 the Region of Tuscany instituted the " Castelvecchio Natural Reserve" entrusting the management of it to the Provincial Administration of Siena , which divides the "Reserve" itself into two zones: the "A" with archaeological characteristics and "B" with flora and fauna peculiarities. The protection of the area "A" is entrusted to the Historical Group of Castelvecchio that continues the work of "rebirth" of the ancient settlement planning every year "research fields" in the summer period where many volunteers continue to participate without receiving any compensation.

We must remind that Castelvecchio needs constant care because of the dilapidation of buildings and the involuntary damages caused sometimes by incautious visitors so that it's necessary to take protection measures that go beyond routine maintenance. For more information on Castelvecchio it is advisable to contact the Historical Group of Castelvecchio, telephone and fax 0577 / 941388 e-mail castelvecchio.valdelsa@gmail.com. 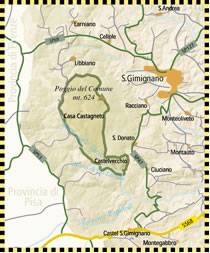 Castelvecchio Nature Reserve is situated in Val d'Elsa, a few kilometers westwards from S. Gimignano, and includes the western side of the Poggio del Comune (624 m) extending to South up to the fascinating ruins of the Castelvecchio castle which is perched on a rocky outcrop at an altitude of 379m. The Castelvecchio castle was an important fort during the medieval period. It had the advantage of a natural line of defence provided by two small rivers, the Botro di Castelvecchio and the Botro della Libaia, both tributaries of the larger river Elsa.

The particular landform of the Reserve and its consistently chalky topsoil influenced the heterogeneous vegetation. A multi-species oak wood covers a large area of the Reserve, particularly on the more gentle slopes. On the steeper, rocky outcrops however the ground is covered with stunning Mediterranean scrub such as colourful flowering heather, a plant which is commonly found on chalky land near the coast but which is much rarer in the inland. Very little sun reaches the bottom of the narrow ravines of the Botro della Libaia and the Botro di Castelvecchio rivers causing an interesting thermic inversion. This has lead to the growth at the valley bottom of beech, maple and other rare tree species like the yew, that is a residue of the vegetation of millions of years ago, which are usually found much higher altitudes where the air is cooler.

The many rocky outcrops, often with over-hanging rock faces, are particularly concentrated in the southern part of the Reserve. These distinct formations lead to an interesting ambient variety that influences in a very important way the fauna. In fact, the rocky slopes that hold the ruins of the Castelvecchio castle provide a winter home to the exceptionally rare peregrine falcon. The limestone rocks are also the perfect habitat for the Solatopupa Juliana, a kind of mollusc found only in the rocky areas of Tuscany, western Liguria and Alto Lazio.

Several old abandoned farmhouses testify to the fact that the flatter areas of these limestone hills used to be cultivated. Today, this area is covered with dense shrubs and pastures. Along with the agricultural land that surrounds the park, these provide food for the many birds who live in the Reserve. For example, there is the rare short toed eagle which feeds almost exclusively on snakes, the red-backed shrike, the african stonechat and the redstart: three passeriformes which are under threat due to the increased use of intensive agricultural techniques.

In the same place where the church now stands, there was once a tabernacle in which Pier Francesco Fiorentino painted a fresco with the image of the Virgin nursing the Child (probably between 1475 and 1499).   The tabernacle was neglected, and after the roof fell, it got covered by brambles and ivy until it totally disappeared from sight. In the second half of the seventeenth century, all of the Valdelsa area experienced a period of poverty and famine due to drought.

It is told that in the first days of April 1668 Bartolomea Ghini, a  shepherdess, dumb from birth, was particularly sad because of her own poverty and in bringing the flock to the pasture, she was seized so much with despair that she deeply wept. At that same moment, a beautiful lady appeared and asked her the reason for such sadness. Bartolomea replied to her and the lady reassured the girl by telling her to go home where she would find the pantry full of bread, the oil pot full of oil and the cellar full of wine. Suddenly Bartolomea realized that she could speak and she fled home calling her parents loudly. They were too amazed to hear their daughter talking and finding that the pantry was full. All the villagers went to the pasture where Bartolomea said that she had seen the mysterious lady, but only to find a pile of brambles.
Once there, with scythes and billhooks, they removed the plants to discover that these were hiding a tabernacle with the image of the lady that Bartolomea said to have met. In trying to eradicate the brambles, the image was scratched by a billhook and this sign is still visible today. Since then, it was decided to venerate Our Lady with the title of Mother of Divine Providence.
The news attracted a multitude of pilgrims who brought offerings and materials to build a church in order to protect the image. Thanks to these efforts and collaboration, the church was erected and consacrated two years later (the works ended in 1670).
In 1923 the church was elevated to the status of Diocesan Sanctuary.
On July 14, 1944, the retreating Germans undermined the church which was almost completely destroyed: only the wall of the altar was saved and it is there that the sacred image was placed. The reconstruction of the Sanctuary was initially entrusted to the engineer Dino Loni, who proposed a neoclassical building with a central plan and a high dome, smaller in size, but much more impressive. The church was, then, rebuilt following the original project entrusting the direction of the works to Professor and Architect Severino Crott: the Sanctuary was consacrated on 19 October 1949.
On 12 October 1997 the regency of the building was transferred from the secular Clergy to the Institute of Servants of the Immaculate Heart of Mary.