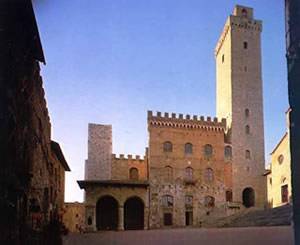 Palazzo Comunale (Town Hall) stands on the central Piazza del Duomo. Inside there is the famous room "Sala di Dante" that is decorated with important collections of courtly frescoes and the Picture Gallery with its works dating back to the 13th and 17th centuries. From Palazzo Comunale you can also go up to the top of the Torre Grossa, San Gimignano's highest tower from where an amazing view will take your breath away.
It is also possible to climb the Torre Grossa. From its top you will enjoy the view of the town and its surrounding countryside, including the whole Valdelsa region to the mountains of the area of Pistoia and to the Apuan Alps.
Palazzo Comunale (Town Hall), one of the most important buildings in San Gimignano, stands on the southern side of Piazza del Duomo. It was built on the remains of a previous building between 1289 and 1298. Further enlargements, dating back to the 14th and the 15th centuries, defined the space of the inner courtyard, which was afterwards decorated with frescoes representing the coat of arms of important public personages of the town.
The main building was used either as the dwelling-place of the Podestà, who was always a foreigner for reasons of impartiality, or as the meeting place of the Public Council. The two upper floors are the "historical" seat of the Town Museums, first founded in 1853. The tour includes a visit to Palazzo Comunale, one of the most ancient public buildings in Tuscany, decorated with some famous collections of frescoes about love (see the fresco by Memmo di Filippuccio in Camera del Podestà) or about hunting and tournaments, such as the fresco attributed to Azzo di Masetto, and eventually the large Maestà by Lippo Memmi in Sala di Dante (the ancient Council Hall).
The visit continues with the Pinacoteca (Picture Gallery) where you can follow the fundamental moments of the artistic history of San Gimignano: from the Florentine artists - Coppo di Marcovaldo and Azzo di Masetto - and the Sienese artist Rinaldo, all working in the second half of the 13t" century, to the great Sienese season of the second half of the 14th century (Memmo di Filippuccio, Lippo Memmi, Niccolo di Ser Sozzo); from the alternating presence of both Sienese and Florentine painters between late 14th and early 15th century, to the final prominence of the Fiorentine ones (Filippino Lippi, Benozzo Gozzoli) who contributed to the Renaissance renewal of San Gimignano. The masterpiece of this period is the great altar-piece painted by Pinturicchio in 1511. Outside the Museum, in the Courtyard, there are frescoes of coat of arms of the podestà and the surprising fresco of Sodoma (first years of the 16.th century) and the recently restored ancient bell of the year 1328.

Church of San Lorenzo in Ponte

The Church of San Lorenzo in Ponte is located on the left, next to the large building of San Domenico (a former prison), originally the Castle of the Bishop and the first nucleus of the town. This Romanesque church was built in 1240.
Its open gallery was closed in1561 to house an oratory. Originally it was next to the drawbridge of the Bishop's castle that gave the name to the church (ponte means bridge).
The church is very simple, both outside and inside. Its brick façade has got a portal surmounted by a canopy, by a small mullioned window, and by a very small bell tower.
Inside there is a cycle of frescoes depicting scenes of St. Benedict and, on the bottom, a large fresco with Christ in Glory, Virgin and 12 apostles by Cenni di Francesco di Ser Cenni around 1413. 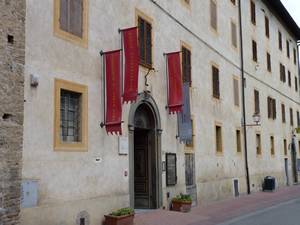 The former Conservatorio di Santa Chiara is in Via Folgore da San Gimignano and is divided into two floors: the first floor hosts the Archeological Museum and the Herbarium of Santa Fina.
The second floor hosts instead the Modern and Contemporary Art Gallery "Raffaele De Grada".
The gallery is the town's biggest exhibition place where lot of temporary art exhibitions are hosted.

Set on the first floor of the museum in the former Conservatorio di Santa Chiara, the group of ceramics and glass wares, once belonging to the ancient Herb Pharmacy and Herbarium (Spezieria) of the Spedale di Santa Fina, represents one of the most beautiful and interesting collections in San Gimignano.
The display exhibits more than 100 ceramic and glass wares from the 14.th century and reproduces the ancient structure of the pharmacy with the "shop", where the medicines were sold, and the "kitchen" where they were prepared. On display also some of the ancient substances and drugs found inside the containers.
From 2008 the Museums exhibits also a precoius collection of ceramics of the 17.th and 18.th century (Casteldelmonte, Faenza, Montelupo) that were given to the Town from Fiamma e Gianfranco Pacchiani.

This Gallery, that opened again to visitors in June 2002, is the outcome of a long tradition of works of art commissioned by the Town, which has increased its cultural heritage year after year thanks to donations and temporary exhibitions. The current layout, by the critic Enrico Crispolti, shows just part of the numerous works of art belonging to the Comune di San Gimignano including paintings by Niccolò Cannicci, Renato Guttuso, Sergio Vacchi, Vinicio Berti, Carmelo Zotti, Luciano Bartolini, and Marco Gastini.
The Gallery also houses paintings by Raffaele De Grada, whose name was given to the Gallery. Among them, some important works such as "Fuga in Egitto" (Flight into Egypt) and "Il ponte degli Scopeti" (The Scopetis' Bridge). One of the halls of the Gallery houses the entire cycle of "Il pericolo" (Danger) by Giannetto Fieschi.

Set on the first floor of the museum in the former Conservatorio di Santa Chiara, the Archaeological Museum exhibits Etruscan, Roman and Medieval finds.
This is a very important collection, coming from the town and its surroundings, which illustrates the history of San Gimignano through the description of the techniques used to create glass or pottery household objects over different periods.
The Etruscan collection is housed in four rooms of the Archaeological Museums. The material, coming from the necropolises and settlements of San Gimignano, dates from the 7C-1C BC.
The medieval section of the Archaeological museum consists of two rooms. In the first room, there are explanations about the techniques used to create pottery or glass wares; The second room houses finished glass and pottery wares - kitchen and table sets dating back to the period between the Middle Ages and the Renaissance.