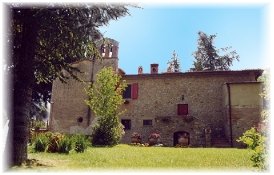 CAMPORBIANO, a historical fortress which in the XII century came to the bishop of Volterra from the Cadolingi. In 1332 the building complex became the scene of political facts that presaged the subjection of the free commune of S. Gimignano under the Republic of Florence. The Ardinghelli who were sent away from S. Gimignano were hosted here. The people of San Gimignano, headed by M. Piero Saracini, di Siena, Podestà and Capitano del Popolo fought the Ardighelli and burnt Villa di Camporbiano, arousing the wrath of the Florentine Republic that sentenced S. Gimignano by default to pay a fine of 50 lire and 147 people from San Gimignano to be burnt to death. This was the prelude to the irremediable discord between the factions of the town of S. Gimignano that led to its spontaneous subjection to the Florentine republic. In 1432 it was occupied by Piccinino and Pietro Strozzi camped there in 1554. It was then reduced to Villa by the Paciatichi and also the Church of SAN MARTINO was restructured in the XVIII century. Today, CAMPORBIANO 1 is a PARISH HOUSE. It was restructured in 1997 on 2 storeys with 2 independent entrances. The ground floor is used by the owners. The first floor with entrance from the garden is composed of a balcony, 3 bedrooms each with annexed bathroom with multi-purpose shower cabin, a large kitchen-living room with fireplace. All rooms have satellite TV, heating system and telephone for receiving only. The Villa is furnished in Tuscany Poor Art style. Villa Camporbiano is located in the Archaeological Park area of the town of GAMBASSI TERME, a ten minute's ride from SAN GIMIGNANO and from the GAMBASSI spa. It is surrounded by a large Garden-Park with secular trees and swimming pool and 1 hectare and 400 metres of woodland with pine trees and a small lake where very nice walks amid nature are possible. The 2 units have separate garden and green areas, only the swimming pool is shared between the 2 units.